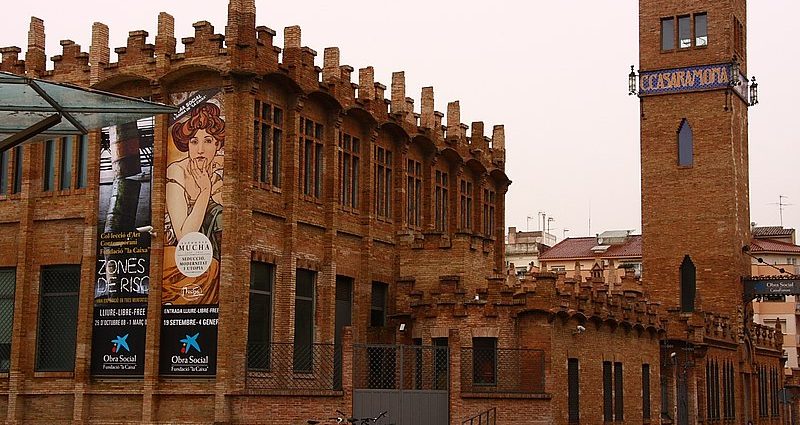 By: boussole
In: Museums
masquer
1 History
2 Why visit the CaixaForum in Barcelona?
2.1 Video
3 How to get there
3.1 Related posts:

Located in the building of a former textile factory renovated by Josep Puig i Cadafalch, a famous modernist architect, the CaixaForum space is now an important cultural center in the city of Barcelona. The CaixaForum center is a work managed by the bank La Caixa through its foundation and is part of its social work initiatives. The objective of its creation was to offer the public access to art, culture, architecture and education.

The building belonged to the cotton manufacturer Casimir Casaramona, who decided to concentrate all the production of his three factories into one in 1909. The factory opened in 1913 and closed six years later. Since then, the building has been used for various purposes, such as a warehouse or the headquarters of the National Police Cavalry. Years later, La Caixa bought it and, after declaring it a property of cultural interest in the 1970s, began rehabilitation work and adaptation for cultural and social purposes. Soon after, it was declared a historical monument of national interest.

Only the exterior and the roof still suggest that the CaixaForum in Barcelona was a textile factory. Today, the interior offers space for various temporary exhibitions of contemporary art, a conference room, a media library, a café restaurant and a museum store.

Why visit the CaixaForum in Barcelona?

There are two main reasons: its cultural and educational program, which is aimed at all audiences, and the building in which it is located. It is a modernist style building of more than 12,000 square meters, built of brick, glass and wrought iron elements, which received the annual award for artistic buildings in 1913.

The building is a horizontal nave of one floor with several exhibition rooms for artists such as Dalí, Rodin, Freud, Turner, Fragonard and Hogarth. Its program of activities is very broad: concerts, cinema, conferences, literature and multimedia art.

Art with social responsibility
Not only contemporary artists can be seen here. There are also long-term exhibitions with a socially responsible character. In the museum store you will find an extensive collection of art books, cards and gifts.

The museum is an initiative of the Catalan bank La Caixa. Holders of a La Caixa bank account can visit the museum for free. Other visitors pay an entrance fee.

The cultural and artistic space is located just below Montjuic, near the Fira de Barcelona and the MNAC.

You can get there using any bus that stops at Plaza Espanya or the green or red metro line, leaving from the Espanya stop. CaixaForum is open from 10am to 8pm, Monday to Sunday.