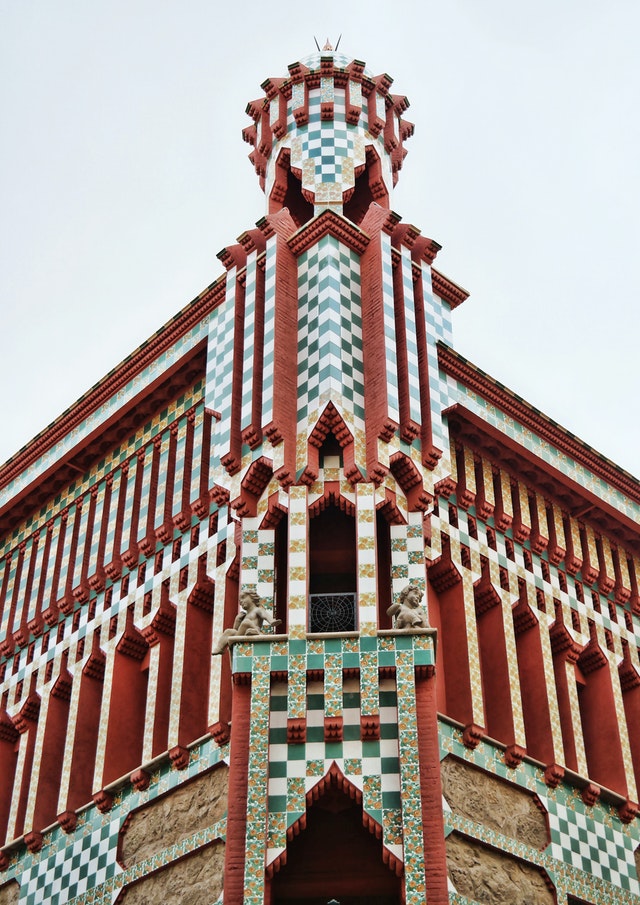 Casa Vicens was Gaudí’s first private work, after he graduated and carried out numerous public works as an architect’s assistant. The house was commissioned by his friend Manuel Vicens i Muntaner, a stockbroker.

At first it was a small summer house, located in the old town of Gràcia. Years later, the house was sold to a doctor from Barcelona and became a permanent residence. In the 1920s, the owners asked Gaudí to enlarge the house. The architect did not do it, but indicated a student to perform the service. As a result, the northern part is a retrospective enlargement.

The house attracts attention by the colour of its tiles and its Arabic forms, which remind the houses of Morocco. Some of the tiles have yellow carnations printed on them, a flower that Gaudí found in the floor when he went to take the measurements.

The protective fence of the house is another decorative element that attracts the visitor’s attention. According to them, the ground had a palm tree whose leaves inspired the design of the wrought-iron fence.

The main room has the ceiling decorated with olive branches, the sides of the doors with birds, the walls with vines and the balconies with palm trees and carnations.

I can’t let the beauty of the furniture in the main room stand out. They were made to order and are decorated with 34 paintings depicting seascapes, domestic interiors and scenes of daily life, by Francesc Torrescassana i Sallarés.

Another charming part of the house is the smoking room. A warm place richly decorated with papier-mâché, which recreates an atmosphere of the thousand and one nights.

The walls of the rooms are decorated with impressive graffiti.

The house was commissioned by the Catalan owner of a tile and brick factory, Manuel Vicens i Montaner. He inherited the house from his mother. Gaudi met him in the Catalan Allela, where they talked a lot while walking. This was the first commission Gaudi received after graduating. It took place in 1877, the construction of the house did not actually start until 1883 and was completed two years later.

After the death of the first owner, the house underwent radical changes, the new owner turned it from a summer house into a year-round residence and this is hardly surprising – it would be a shame for such a masterpiece of architecture to remain empty for most of the year. The house was private all that time and could not be entered. In 2014, its owner became the MoraBanc bank, which commissioned a total restoration of Casa Vicens and opened it to the public.

The visit is quick. There is no audioguide but the house offers a guided tour.

Casa Vicens has been included in the UNESCO World Heritage List. The house has been restored with great attention to detail and is in a truly fantastic state. The house has been somewhat enclosed by the other buildings around it and suffers from a lack of sunlight. The garden that originally belonged to the plot has turned into a small patio as the city has grown.

How to get to Casa Vicens