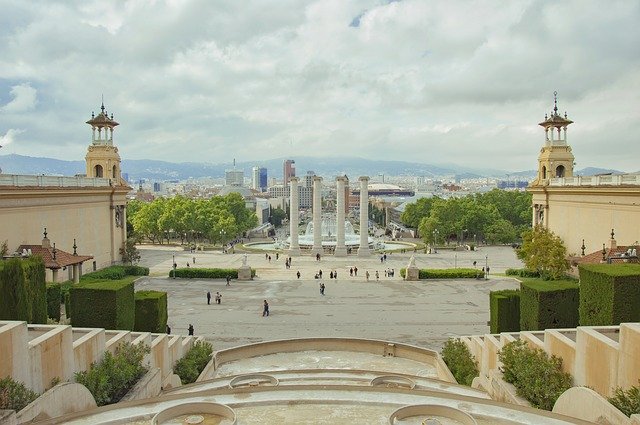 By: boussole
In: Borough
masquer
1 Video
2 How to get to Montjuic?
2.1 Related posts:

Montjuïc is the hill next to Barcelona. From the hill you have a beautiful view of the city! The 180 meter high mountain, in the middle of the city, offers attractions for those who love art, sports, nature and history. Of course, you can also take a walk in the large park.

In the Middle Ages, the mountain of Montjuic was the cemetery of the Jews, hence the current name. Montjuic means Mountain of the Jews. In 1492, the Jews were expelled from Spain and the mountain was abandoned for a long time. It began to be visited again in 1929 with the International Exhibition of Barcelona.

It was at this time that the Plaza España was built, the National Palace, which today houses the National Art Museum of Catalonia and the Magic Fountain. In the 1930s, the Olympic Stadium was built.

When Barcelona hosted the Olympic Games in 1992, the city underwent a major revitalization and the Montjuic area benefited from the modernization of its infrastructure.

Swimming pools, stadiums and sports tracks were built, which greatly improved the area. Subsequently, the area has become a reference as a tourist destination and today attracts millions of tourists.
Montjuïc Castle

Originally, the “castle” was built as a fortress, but only after 50 years was it transformed into a castle. From the top of the castle you have a panoramic view of the city and the sea, which is why it was the perfect place to defend the city during the wars. Over the years, the castle has been used for many military purposes. Today the castle houses a military museum, it is also possible to learn more about the history of the castle.

How to get to Montjuic?

Montjuic is considered one of Barcelona’s tourist spots due to its location, which is highly sought after by those who want to contemplate the beautiful view of the city.

The easiest way to get to Montjuic Mountain is to take the funicular from the Paral-lel metro station. It’s a quick trip to the Montjuic cable car. From there, it is possible to climb on foot. The trip is short and in 20 minutes of walking you will reach the highest point of the mountain. One detail: the climb is very steep. If you arrive at the station by metro, you will not pay anything to take the funicular.

Opening hours of the funicular

You can also get there by cable car. The cable car ride is very fast and the view of the city and the sea is fantastic. Open from 11am to 6pm