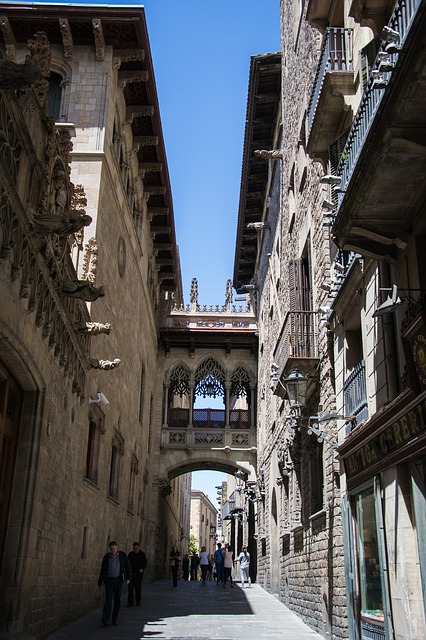 The Barri Gotic has, as one can guess by its name, a large number of medieval Gothic buildings. The Gothic Quarter of Barcelona is a unique historical site and offers visitors a magnificent combination of perfectly preserved medieval buildings and a lively commercial activity. A stone’s throw from La Rambla, this is the core of old Barcelona. It’s a maze of dark streets and squares with lots of cafes and bars, and the cheapest accommodations in the city. Most of the buildings date back to the 14th and 15th centuries, when Barcelona was at the peak of its commercial prosperity and before it became part of Castile. The district is turned towards Plaça de Sant Jaume, a large square where the market takes place and which sometimes serves as a place for the local traditional dance, the sardana.

It is the heart of the city, located between the cathedral and the town hall.

The Gothic Quarter, so named because of its many buildings built between the 13th and 15th centuries, is actually much older. Visitors will discover the remains of ancient fortifications and the temple of Augustus built by the Romans on Mount Taber.

Plaça Nova is the heart of the Gothic Quarter and the oldest square in Barcelona despite its name. It extends to the cathedral. From Roman times, there are two watchtowers. The square is surrounded by the facades of the College of Architects, with a strip of decorative cement engraved by Picasso, the Episcopal Palace of Palau and Portal del Bisbe.

The Santa Eulalia cathedral is a fine example of Catalan Gothic. It was inaugurated in 1298. It houses the Pla de la Seu, dominated by Casa de la Canonja (16 th century) and Pia Almonia, housing the Museo Diocesano de Barcelona on one side and the Casa de l’Ardiaca ( 12th -15th century.) On the other. The current building was built on the former site of a Romanesque church. The complicated facade was added much later in the 19th century. There is a very interesting old crypt and a double row of beautifully carved stalls. The side chapels are rich in Gothic altarpieces and marble tombs. The cloister, dating from 1448, forms a relaxing oasis of greenery with palm trees and magnolia.

The Palau de la Generalitat (Provincial Council) was built between the 15th and 17th centuries to house the autonomous government of Catalonia. It has a Renaissance-style façade (16th century) in Plaça Sant Jaume.

The Plaça del Rei (King’s Square) is the most noble urban space in old Barcelona. In this majestic square stand some of the city’s most important medieval buildings: the Palau Reial Mayor, which houses the exquisite Saló Tinell banqueting hall, the chapel of Santa Agatha (14th century), the Palau de Lloctinent, a 16th century Gothic palace with Renaissance additions and the Clariana Padellàs house, which now houses the city’s history museum. The Frederic Marès Museum is on display in the Palau Reial Major.

Next to the Centre for Catalan Excursions is the Plaza San Jaume, a Gothic structure in Renaissance style. The Adjuntament (Town Hall) from the 14th century with its Saló de Cent (Hall of the Hundred) in Gothic and Neoclassical style.

Plaça Sant Just is located between C. Ciutat and C. Hèrcules, with its famous Gothic fountain. Next to the C. Bisbe Caçador, we can see the gothic church of the pastor of Sans Just. Going down the street, we notice the Sant Felip Neri square and the church of Sant Sever.