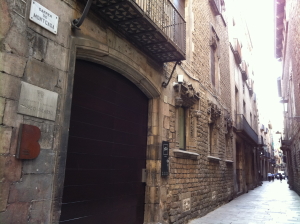 By:
In: Museums
masquer
1 Visit Gràcia : Barcelona’s Coolest Neighborhood
2 How to get to the Picasso Museum?
2.1 Related posts:

The Picasso Museum in Barcelona is dedicated to one of the most renowned artists in the world. Pablo Picasso remains in the memories even for those who do not know art. The Spanish artist spent much of his life and career in Paris, where he became famous, but also lived in Barcelona during his formative years as a painter.

The Picasso Museum is dedicated to this phase of his career. Like several other museums in Barcelona, it has free admission on selected dates and times. It was at one of these times that I visited the space. In this post I tell you a little about the history of the museum and its relationship with Pablo Picasso, the works on display, practical information about the visit and how to get to know the attraction free of charge.

Picasso was born in Málaga in 1881 and began his artistic studies at the age of 11. In 1896 his family moved to Barcelona and Pablo entered the School of Fine Arts for two years.

In the following years he stayed between Barcelona and Madrid. It was in Barcelona, at the Cervecería Els Quatre Gats, a meeting place for avant-garde artists, that he had his first exhibition. Although he settled permanently in Paris in 1904, the artist kept coming back to Barcelona throughout his life.

His relationship with Barcelona in his formative years led him, in the early 1960s, to decide to set up a museum there. Picasso himself and his personal secretary, Jaume Sabartés, proposed to the city of Barcelona the creation of a museum dedicated to the work. The space was inaugurated in 1963 on Calle de Montcada, where it is still located today.

The name was originally Colección Sabartés and not the Picasso Museum of Barcelona. The reason was Picasso’s open opposition to Franco’s fascist regime, which prevented the opening of a museum bearing the artist’s name.

The initial exhibition included works by Pablo’s personal secretary and the collection of Picasso’s works from Barcelona’s art museums. In 1968, on the occasion of Sabartés’ death, Picasso paid homage to his friend by donating Sabartésy’s Blue Portrait and the Las Meninas series to the Picasso Museum in Barcelona. Two years later, Picasso donated another 900 works that were in the family home in Barcelona.

Today, the permanent collection comprises 4251 works, most of which refer to his formative years. In other words, there are numerous projects, essays, exhaustive practices and paintings that mainly constitute the blue phase.

The most “recognizable” works in the Picasso Museum in Barcelona are those in the Las Meninas series, the paintings painted in 1957 are an artist’s interpretation of Velázquez’s work of the same name.

The Picasso Museum occupies the space of five original palaces from the 13th to the 15th century, on Calle de Montcada in the Born district. They are buildings built in the Catalan Gothic style and are an important example of the civil architecture of the city’s medieval period. These palaces were inhabited by nobles and wealthy bourgeois.

When the Picasso Museum was inaugurated, it only occupied the Gothic Aguilar Palace. An extension, in 1970, also included the Baró de Castellet Palace. In 1981, the Palace of Mecca became part of the space. Finally, in 1999, a new extension to the museum was inaugurated, with the inclusion of temporary exhibition spaces in the Mauri House and the Palacio de los Finestres.

After discovering the famous Picasso museum in Barcelona, you can also visit Gràcia. The authenticity of this famous neighborhood will certainly please you. Far from being a highly touristic address, Gràcia is more like a village made up of a heterogeneous population (students, artists, retired people…). Gràcia offers many interesting sites that you must discover. It is about :

There are other beautiful sites that you can discover in this neighborhood. To make the most of it, you can stay here during your stay. To do so, visit a specialized platform like Ukio which offers monthly rentals of chic apartments and penthouse. You will certainly find what you are looking for.

For food and drink, you will find in Gràcia emblematic cafes and two markets with affordable local products.

How to get to the Picasso Museum?