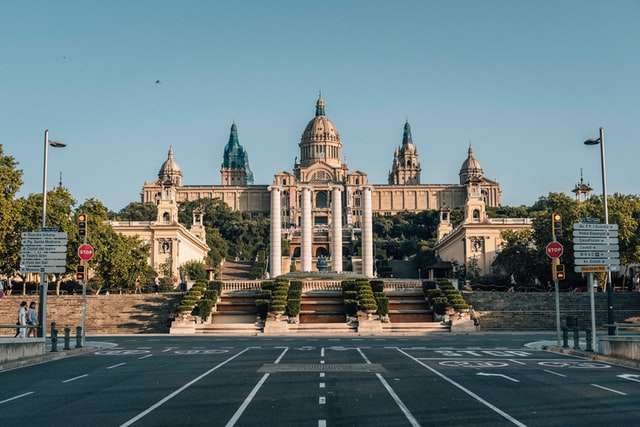 By: admin
In: Museums
masquer
1 The museum is divided into a few sections :
2 Opening hours :
2.1 Related posts:

The National Art Museum of Catalonia, also known as MNAC, is located in Montjuïc, next to the magic fountain, in one of the most beautiful settings in Barcelona. The MNAC is one of the most important museums in the world. Its collection contains objects from the Middle Ages to the present day, allowing the visitor to travel through history in a single space.

The building is of an eclectic style, where elements of the Renaissance and Baroque blend together. The dome is reminiscent of the church of San Pedro in the Vatican, while the towers are a copy of the Giralda de Sevilla. The same was built for the 1929 International Exhibition, being the pavilion of Spanish arts. At the end of the exhibition, some buildings were demolished, but the National Palace, as it was called, remained standing.

The current museum was created in 1990 with the merger of two other museums: the Museum of Modern Art and the Art Museum of Catalonia.

The most relevant collection is that of Romanesque art, which is considered to be the most important and complete in the world. Romanesque art is an artistic and architectural style that prevailed in Europe in the 11th, 12th and part of the 13th century. This collection brings together pieces of wood, goldsmithery, enamel and stone. The absidioles of the Romanesque churches in the interior of Catalonia are the most impressive. They were removed from the churches and rebuilt in the museum in order to preserve them and keep them in Catalan territory, as they were in danger of being badly preserved or sold to private individuals, mainly Americans.

The Gothic Hall contains many works of sacred art. In the section devoted to the Baroque and Renaissance, the following works stand out: two sculptures by Bartolomé Bermejo, a Martyrdom by José de Ribera, an Immaculate by Zurbarán and a famous São Paulo by Velásquez, one of the few reliable paintings by this artist kept outside the Prado Museum.

Another part of the museum is the art of the 20th century, mainly that devoted to modernism. Modernism is an architectural and decorative style of the late nineteenth and early twentieth century adopted by the bourgeoisie. It is a period of great creativity and beauty that is linked to the economic splendour of Catalonia.

The room is dedicated to Ramon Casas, a Catalan modernist painter, and to the furniture. Those who visit the Batlló house do not see the furniture of the period, as the house has not preserved it. In the MNAC it is possible to see the furniture that was used by the bourgeoisie of Barcelona.

The museum also has works by Picasso, Miró, Salvador Dalí and Mariano Fortuny, among others. Of particular note is the fresco created by Joan Miró for the IBM building.

The collection is divided into artistic periods and each one has its own room. If you do not like this period, you do not need to see it and can go directly to what interests you. There is no need to walk between the works and objects, following a compulsory route, as in many museums.

Take a whole morning or afternoon to visit the MNAC. It is very large and there is a lot to see. The good thing is that the museum is very spacious, airy and bright. It has a small shop, a café, a restaurant and a very large corridor to sit and relax with an internet connection.

If you want to see Barcelona from above, it is very interesting to go up to the terrace of the museum. The entrance is independent, you don’t need to enter the museum to go to the terrace. The ticket costs 2 euros and is not included in the general entrance of the MNAC.

The museum is divided into a few sections :